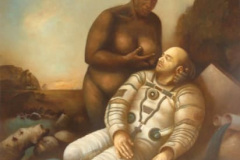 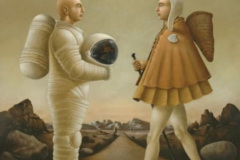 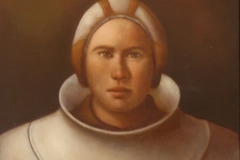 Born in 1961, Tepic, Nayarit, Mexico.
A Doctor in medicine and a Doctor in letters and history, Raymundo Andrade fuses a unique academic background with his art. His canvases are veiled in a delicate sense of nostalgia, and warm muted tones seem to further suspend his images in timeless reverie. His works clearly pay tribute to both the natIve and Spanish cultures that are such a part of Mexico’s vast cultural history. Spiritual, cultural, and natural richness and fertility are themes that pervade the themes of this artist. His works have been exhibited extensively in California, Arizona, Washington, and Mexico.

A physician, philosopher, and artist with an extensive background of exhibitions in Mexico, the U.S., and Canada. “I don’t like making statements about my work, because I don’t paint with a concept or a story as a starting point. I start with an image, so it is sometimes difficult to put into words. They (my paintings) are images that I like, it’s like the sunset, it’s something that strikes you.”
Raymundo appears to be a man drawn to the great mysteries of the human condition. His motivations and themes lead Raymundo to follow the school of the great masters. “If I used a brighter palette, or a hyper-realistic approach, my paintings wouldn’t come across the same”

An artist’s work changes as his vision develops. In Raymundo Andrade’s recent work now showing at the Omar Alonso Gallery, we see the artist in his more resolved attitude toward the fate of the world.

Adrade’s earlier work dealt as well with his particular vision, but they were more playful, less stark in their declaration. In these newer works we are shown a less colorful world, more sober, barren.

Adrade’s world is a thoughtful, philosophic one, where his vision meets the border between imagination and reality, an almost dream world inhabited by unknown personages, people we have not met from times we do not recall. Yet they are present within us, as we are present in front of them.

In some of the paintings being shown, the men and women hold various objects: money, credit cards, a shopping bag, and they are all barefoot even though properly dressed. The landscape is one of desolation with the reminder of life once lived. Ruined skyscrapers, insects, broken tree trunks, and many rocks scattered in brooding waters.

Two paintings show astronauts, technical men of the present, faced with characters from a past culture: an older woman palmist who reads the hand of one astronaut; and a light footed merchant, carrying an empty basket, but dressed more as a court jester faces the other. These astronauts stare stoically ahead at their encounters. Historic characters meet present ones, but neither change who they are.

There is an older painting of a monkey king atop the globe of colonial territories. The monkey has conquered the past. Adrift in the dark waters is a crumpled money bill, a bishop’s hat, and again, senseless rocks.

Included in the show, are small portraits of children about to take a voyage who stare patiently yet apprehensively out at us. All are in white attire, carefully dressed in the clothes of a bygone time. Where are they going and will they get there?

These selected paintings, many of them impressive in their size and meticulous execution, speak of a final destiny to humankind, the artist’s vision of the world as it is, and how it will be. Yet, even in this totality, one finds the artist has surpassed his subject in his effort to describe it. Precisely because Adrade has brought this vision to us, he is somehow free to travel his imagination in paint, to glaze the desolate with his triumph of the mind, and to offer the magic in art as witness.