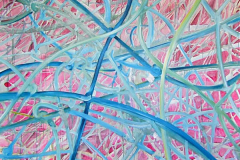 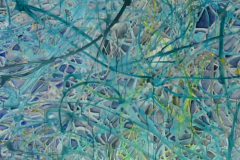 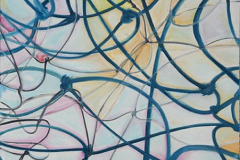 Previous museum shows include:
“The Geometric Unconscious: Desire, Discipline & Modern Art” at the Sheldon Museum of Art until 02/2013.
Other multimedia works were shown in “Pricked,” a group exhibition of artists using embroidery at the Museum of Arts and Design, New York (2007), MAZ museo de Zapopan, Mex, 2003.

Mostra do trabalho /Instituto Tomie Ohtake, Sao Paulo, Br. curated by Julia Buenaventura. Previous one person shows at Thrust Projects (2009), Latin Collector Gallery, New York (2007) and Generous Miracles Gallery, New York (2002), all in NYC.  Other projects  include a commission by El Museo del Barrio to photograph the renovation of their new galleries. De la Cueva’s photographs were showcased in a book to coincide with the re-opening of the museum, she is in the museums permanent collection and also exhibitions include super real: “alternative realities in photography and video”, at El Muse del barrio, NY.  She received support from San Francisco Arts for Project was a word from the children to keep bilingual education in public schools in California. She attended FAAP art residency in Sao Paulo, Br, completed the international “NARS” Residency, Brooklyn NY. The work was recently shown at MACO art fair with Henrique Faria Gallery, NY. permanent collections include of Museo del Barrio, MAD, Museo de Zapopan, and the Jumex Museum among others.


For several years, my artistic work has been the result of an investigation of territoriality, transit and limits. Maps, understood as geographical boundaries – boundaries that include significant economic, political and cultural relations between Mexico and the United States. On our continent the transgression of these barriers is not only prevalent but occurs on an everyday basis. Each year, thousands of migrants move from the southern states of “America” embarking on a journey towards a better quality of life, often at risk of losing their own. Meanwhile, the established drug trafficking networks draw a different route, and although the purpose is not the same, their constant search brings alternative paths to a larger map of their own. Combining imperative and clandestine trade, this human traffic has formed the image of a densely compacted social fabric, with a very uncertain solution.
Using simple visual elements, my attempt is to stimulate a reflection on the profound nature of the border, both in the areas of artistic creation and the no less ambiguous areas of human coexistence.